We made it out of Deltaville as we hoped – the wind was still blowing 20+, but from the right direction.  It was our first shakedown sail in some seas and wind for Intermezzo and she performed very well (I’m not sure the younger crew had their sea legs yet, and the evidence of that could be seen in the gunwale!)

Our destination was Hampton, VA.  There was another cold front coming through – the same one that was felt all over the East Coast, and brought with it gale force winds, so we got a slip at the town dock and spent the next day at the Mariner’s Museum.

For the record, if you do find yourself in Hampton, VA, the Mariner’s Museum is one of the best museums we’ve been to.  Of course the subject matter was interesting, but the layout of the space and presentation of the content was second to none.  The new exhibit featured at the museum focused on the USS Monitor (Civil War History buffs – the Union Ironclad), there was also great info on the CSS Virginia (or Merrimack) and the 4 hour battle that ended in a stalemate, but changed Navel Warfare forever. 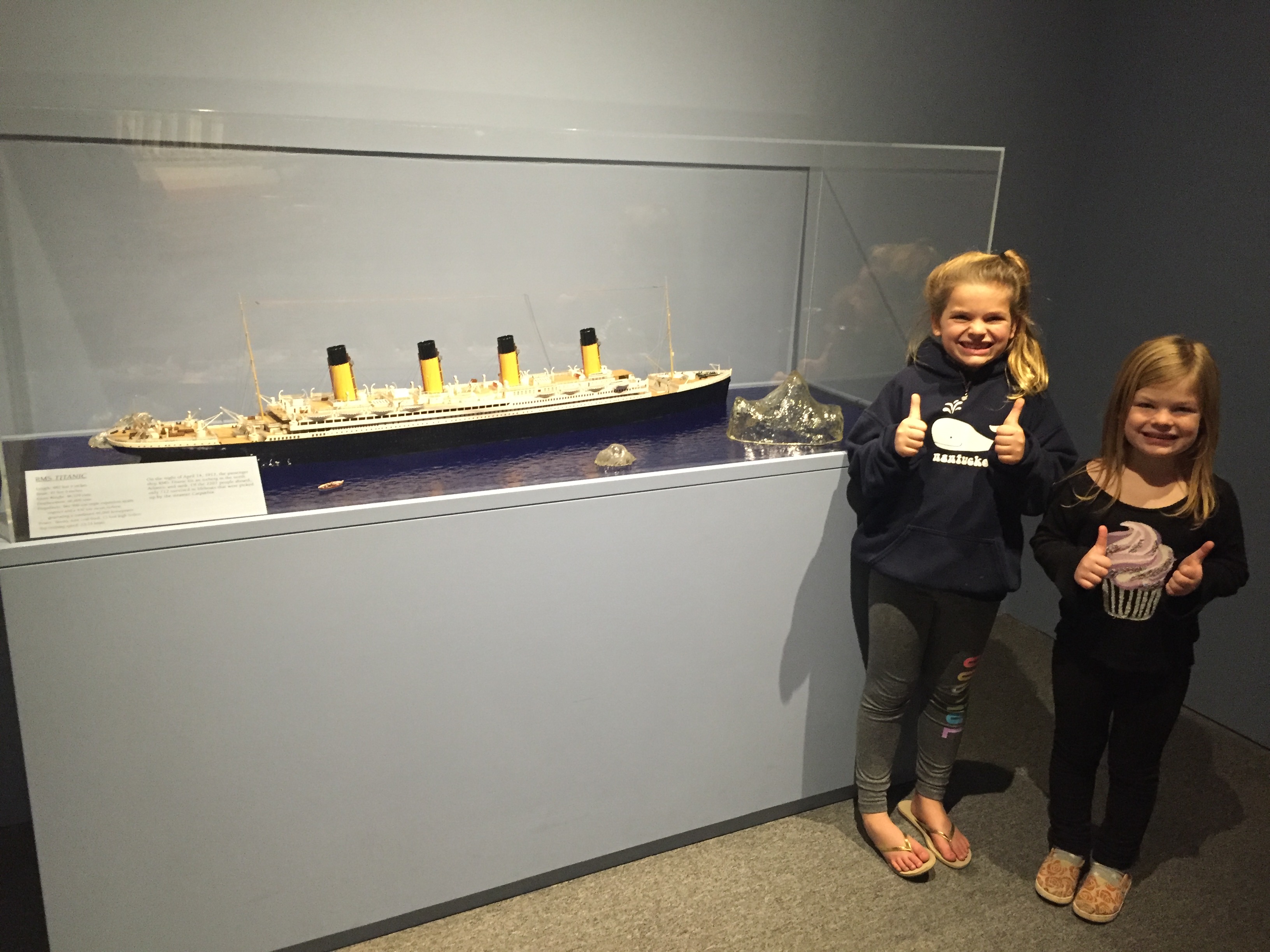 A bit interesting for someone who is living on a boat, but Tali is fascinated with the Titanic.  The highlight for her was seeing the model.

We survived our first night on the boat with the external thermometer reading 32 degrees…  the heat worked fine, but the trip the next day was COLD!  We hit a major milestone that day however…. Mile 0 of the Atlantic Intracoastal Waterway! (and that only leaves 1200 more miles to get to Key West, totally not intimidating at all!!). We also experienced our first lock – there is a two foot difference between the Chesapeake Bay and the  Albermarle Sound, thus requiring a trip through the Great Bridge Lock. We finished our day “pulling over” on the ICW and anchoring off the channel, happy to have arrived in North Carolina with minimal fanfare. An early start on Sunday and we continued south to the Alligator River with a marina stop for electricity and heat overnight, and finally, today we transitted the Alligator River/Pungo River Canal – basically a thin patch of water that goes on for 30 miles in the middle of nowhere NC, where we are anchored in Pungo Creek…further bringing us into the middle of nowhere, with no other boats in sight. The cold is really no joke… We should have had ski jackets on, not foul weather gear!!! 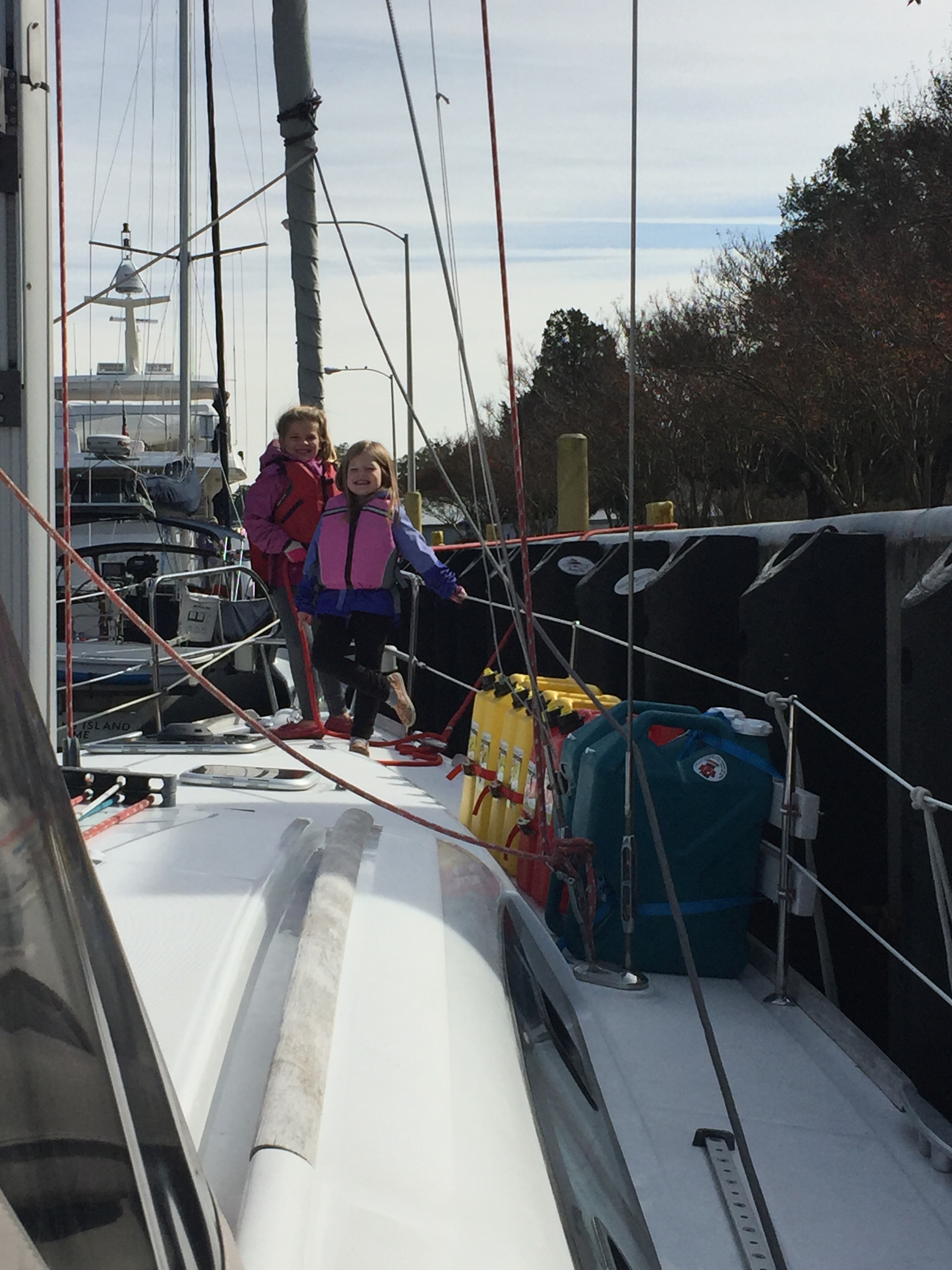 Tali and Savy were the line handlers for the 2 foot trip up in the lock.

It would be great if there were photographic evidence of this, but there is not, so you’ll have to take our word for it.  During our trip through the canal today, 3 deer (bucks actually), decided to go for a swim and crossed the canal right in front of us.  Two made it across, causing only a minor directional change for us; but the third was a little late getting started and was on a collision course for the boat. He eventually made the wise decision of turning around, before Becky had to resort to beating him off with the boat pole! You drive long enough, eventually, you have a run in with a deer, but who would think that it would be with a boat???

Heading further south tomorrow with a good weather window to cross the Pamlico Sound and head south on the Nuese River.

7 thoughts on “Miles Under the Keel…”