If you think the picture looks familiar, it is… Charleston, South Carolina. It was our first milestone when we arrived for Thanksgiving, and now it is our arrival back in the US. We saw the Ravenel Bridge after 55 hours and close to 400 miles offshore from a small, uninhabited island named Great Sale Cay in the Northwestern Abacos.

We didn’t make it here without enjoying the last bit of the Bahamas though. We left off at Hopetown on Elbow Cay. While we had some weather coming, it was time to move on and explore, so we headed north to Great Guana and anchored in Fishers Bay. We explored the island a bit before the weather set in and enjoyed some time in the pool. Unfortunately, we were stuck on the boat for the next 3 days with squall after squall passing through. Worse yet, we entered “bareboat charter land.” We always joke when we charter in the BVIs, that they’ll give a boat to anybody, but it has a different meaning when they are anchoring next to your boat. We had a little excitement with one of those bareboat charters who decided to anchor upwind of a rocky shoal in the middle of the anchorage. He and his 7 close friends were in the dinghy within 15 minutes of dropping the hook – didn’t hang around to see if the anchor was set, or if there was any weather coming… A squall came through and when everything cleared, the boat was hard aground on the shoal on a falling tide. Chris and a group of 4 other dinghies went over to lend a hand – they got the boat off the shoal and things were back to normal with the bareboat anchored well clear of everyone else. 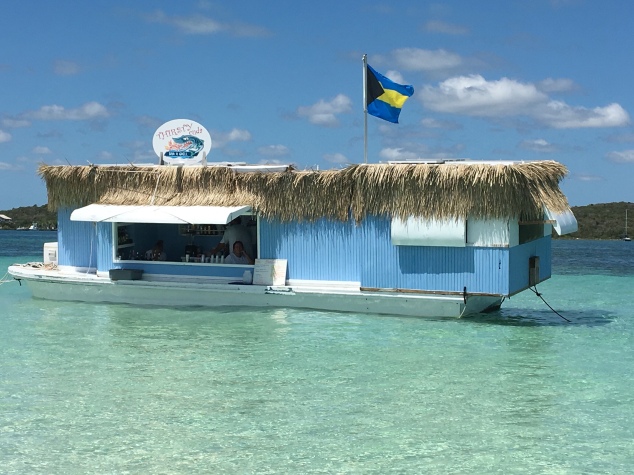 So you’re sitting on an idyllic beach and everything is perfect… then this boxy structure shows up and anchors just close enough to walk to. What can it be? 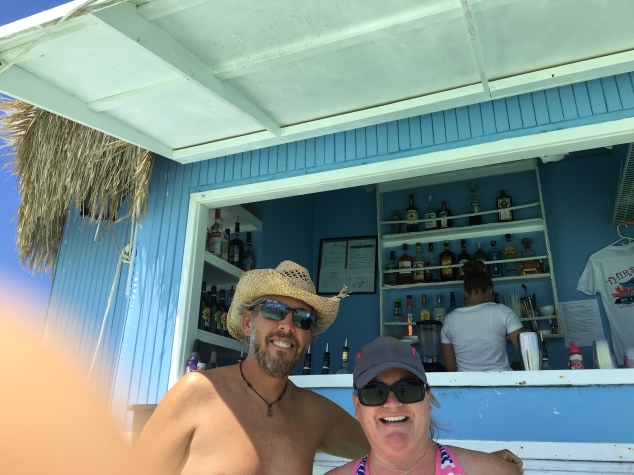 You guessed it – a swim up bar. (Sorry for the finger in the frame) 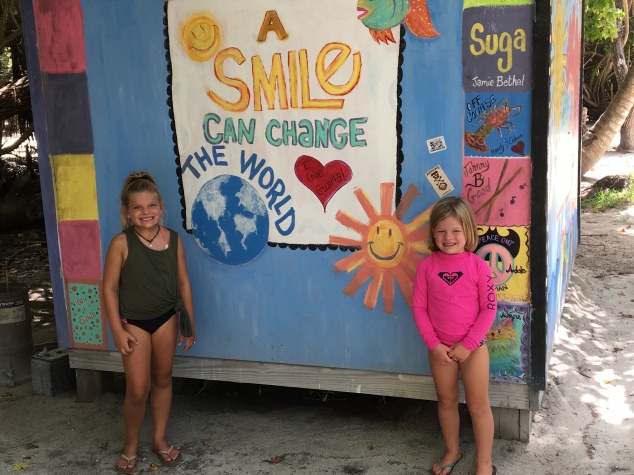 What a great message… 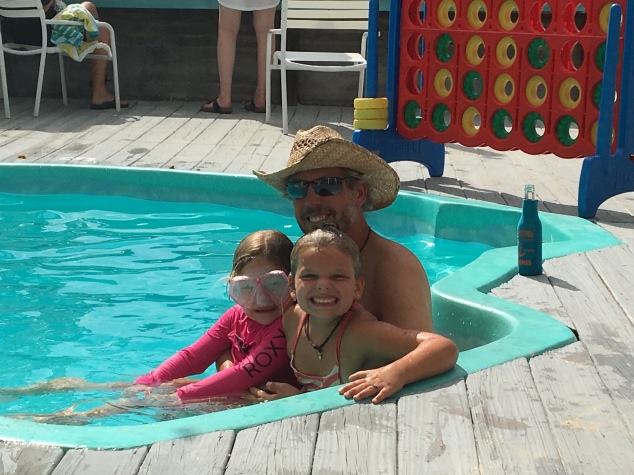 Chris with his girls enjoying some pool time…

Once the weather cleared, we were off to Treasure Cay on Great Abacos. We heard wonderful things about this spot through our travels, especially the beach. Plus, it is the main island of the Abacos, so there were plenty of places to provision for the trip back to the states. We’ve found that keeping the boat in one spot, and renting a car to see the larger islands makes sense, so we did the same thing here. 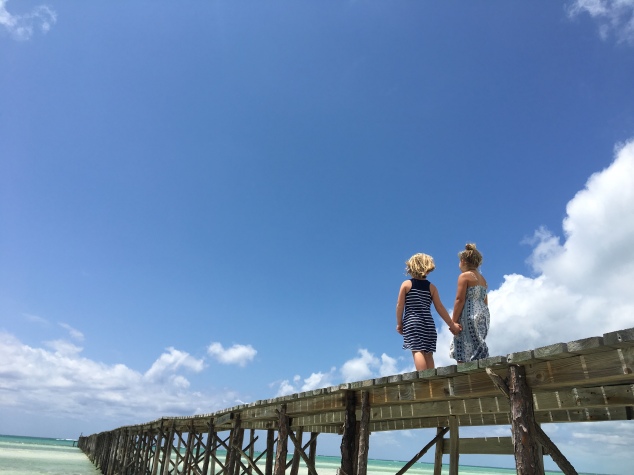 A wooden pier over 800 ft long…. it was the original pier for the mailboat to come in to. 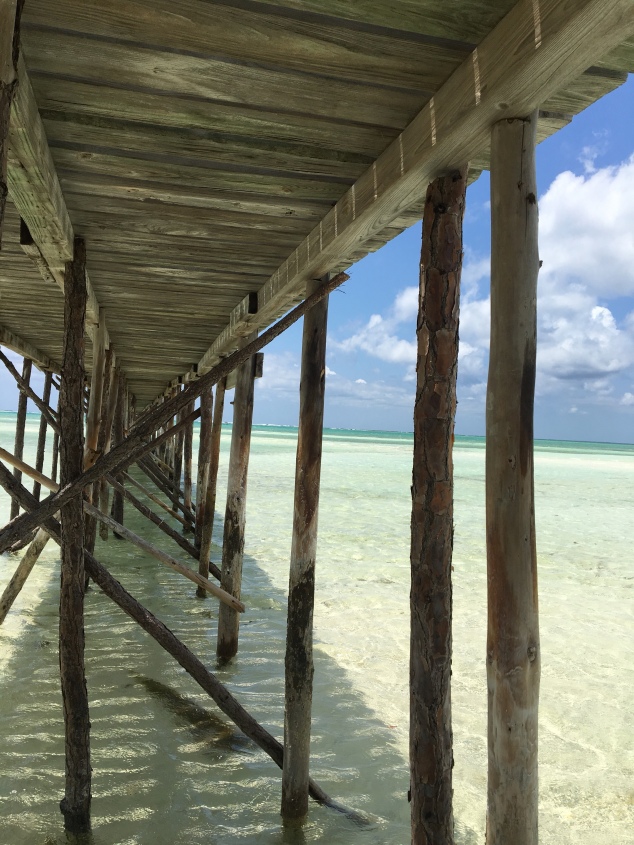 While neither one of us are photographers… this seemed like a cool shot. 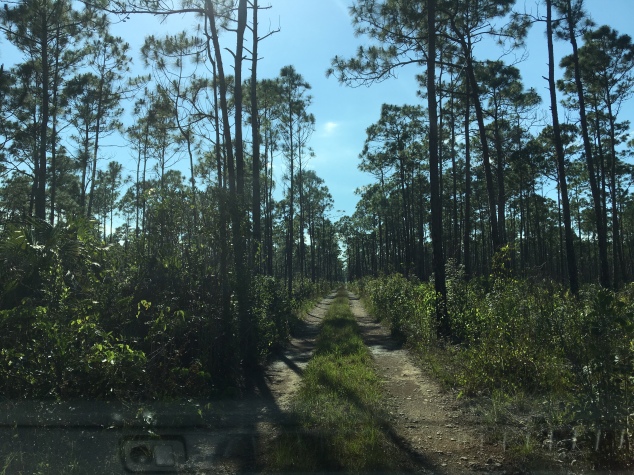 This old logging path was a bear to find… the tour books talked about signs, maps had it on the other side of the street… but we found it! 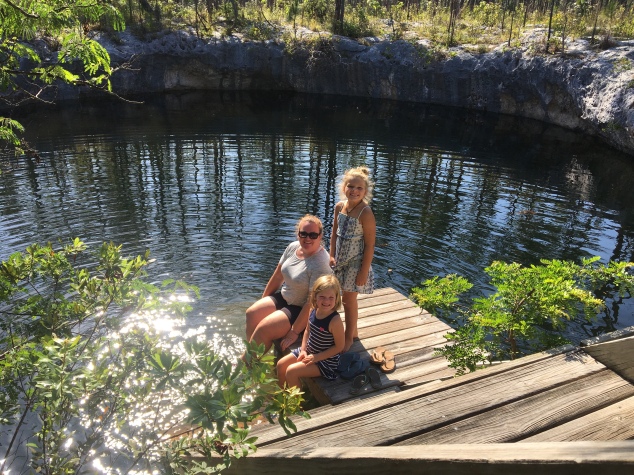 …A blue hole that has been explored by National Geographic and has artifacts going back hundreds of years ago. There were warning signs all over the place when we got there. It was clear that this is an important site and they don’t want tourists finding it or messing with it (which would explain the lack of road signs) 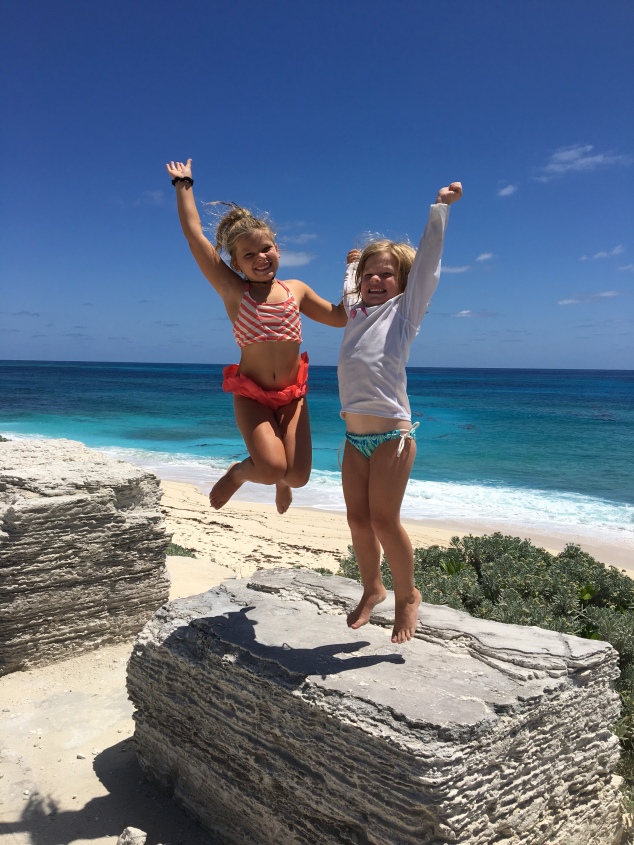 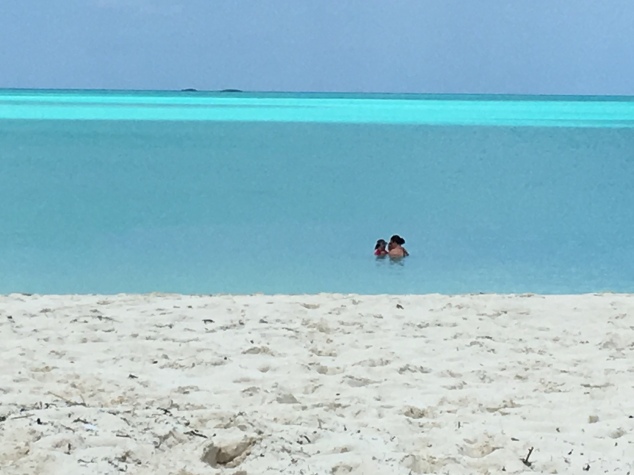 Obligatory beautiful beach picture… the color where the clouds break is spectacular!

We also wanted to see Green Turtle Cay – the weather was not cooperating and we had friends that were expecting us, so we took a ferry across and explored the island. Dave and Kathy are friends of Becky’s parents and have known Becky since she was 10. They have been coming to the Bahamas for years, so having their knowledge (and golf cart) was a great way to see the island. 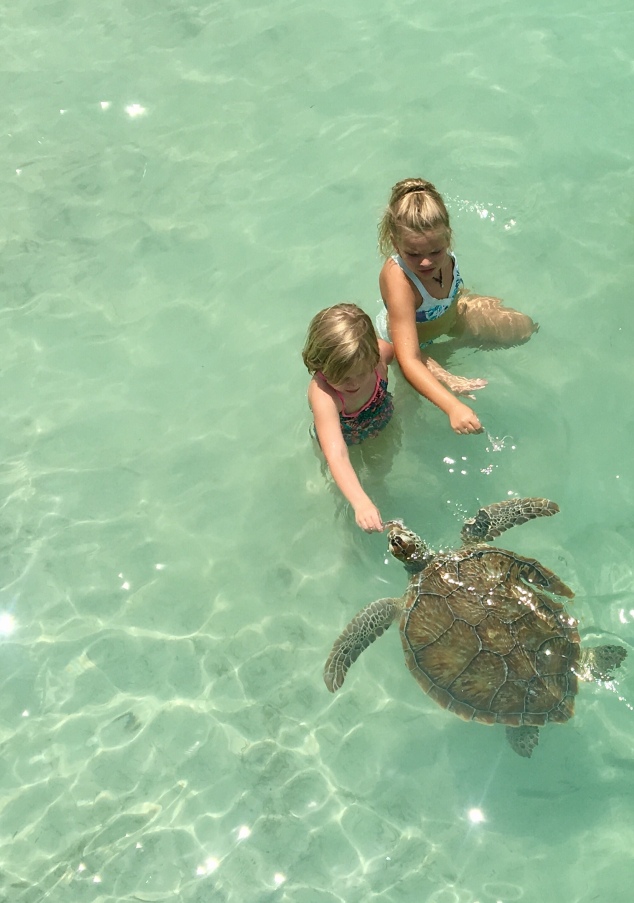 The girls fed the turtles at Farmers Cay in the Exumas, but look at their comfort here at Green Turtle Cay… 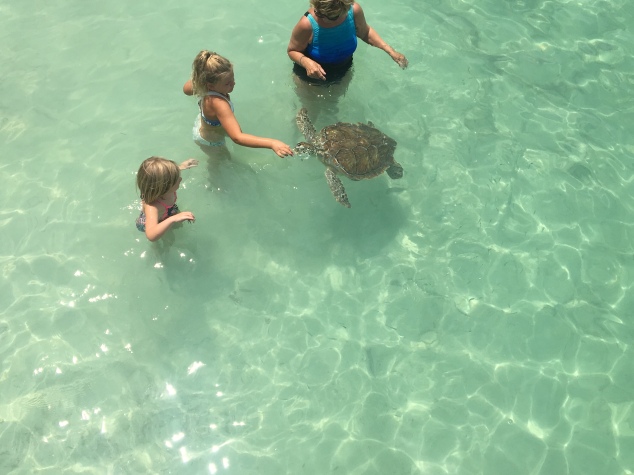 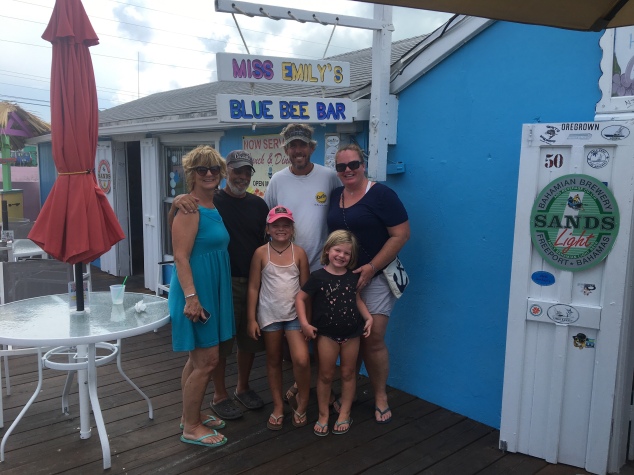 Lunch at Miss Emily’s, the birthplace of the Goombay Smash with our friends the Rizzo’s!

One of the most valuable and truly life-changing experiences of this trip has been the people we’ve met. The pictures don’t cover it – you can’t take a picture of a conversation over coffee talking about the weather with a new friend, or a picture of a conversation about future plans with a group of people who are all taking a path less traveled. Just because these relationships don’t make it into pictures, it does not minimize their impact! Back in the Exumas, we parted ways with our friends on Liberator III. We have been keeping in touch, but with our plans to cross, we know that the next time we see each other, it will not be as part of this journey. They put together this video of our shared time in the Bahamas, and we think it is great to share with you all.

At this point, we had a weather window starting to emerge with over 100 miles to travel prior to stage for the crossing. One challenge we did not expect was how dependent we had become on the internet for our weather. As we moved further west, there were less cell towers, and our staging point had no cell signal at all. This wouldn’t be an issue if we were just crossing over to FL, but we planned a 3 day passage to Charleston. Weather forecasts are pretty reliable out three days, but quickly become less accurate on day 4 and 5. The urgency for this window was that we were starting with the highest winds and seas at the beginning, moving into less winds and down to dead calm by the end. So if the forecast was off, we would just have less wind sooner.

Our plan called for departing Great Sale Cay at 9AM and then traveling 9 hours to the edge of the Bahama Bank to a place called Mantanilla Shoal. Our plan was to drop the hook ‘in the middle of nowhere’ for the night with a 5AM departure. We were trying to limit our passage to one overnight. The two adults could have gone all the way to NJ, on 4 hour watches, but it is tough to tell the girls (who are not on 4 hour watches) that they can’t bother “mommy” or “daddy” when they are not at helm, because they need to be napping/sleeping. Things didn’t quite pan out… the anchorage ‘in the middle of nowhere’ had 4-5 foot seas. While the boat would have been fine and, honestly, the ride at anchor would not have been that bad, sending either one of us up to the bow of the pitching boat to deploy the anchor (and then retrieve in the dark at 5AM) wasn’t worth the risk, so we decided to push on. The girls were fantastic – once they got their sea legs, with the boat dialed in with 1 reef in the main and 2 in the jib – it was smooth sailing. The wind eventually died, as forecasted, we started the engine and motored in to Charleston Harbor dropping the hook across from the Battery… the place where they tied the pirates to the wall at low tide and left them there for three tide cycles to make sure they were dead. 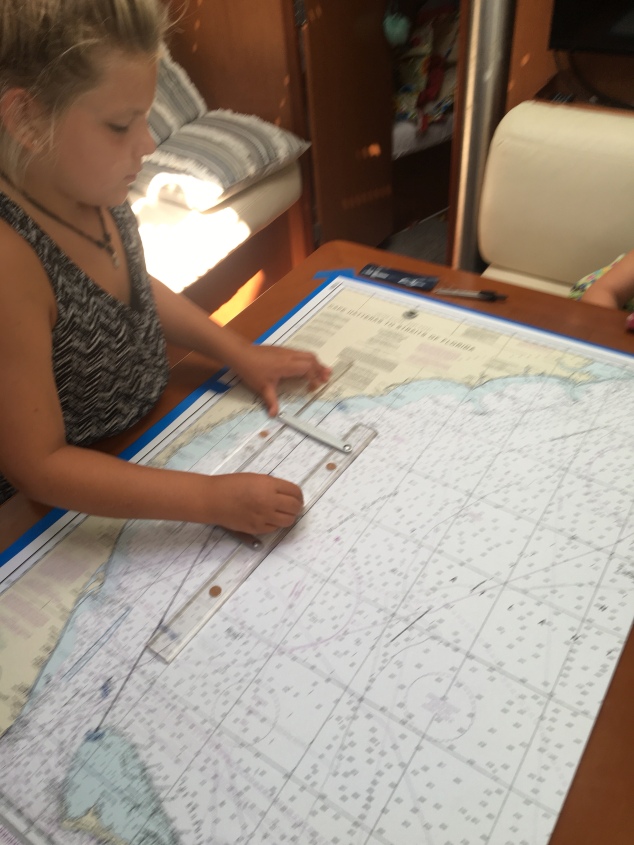 While Tali didn’t sit on the 3AM watch, she did have to plan the entire passage the good old fashioned way. Like we talked about before, we have multiple electronic navigation tools, but before you rely on the electronic tools, you have to understand what they are doing. 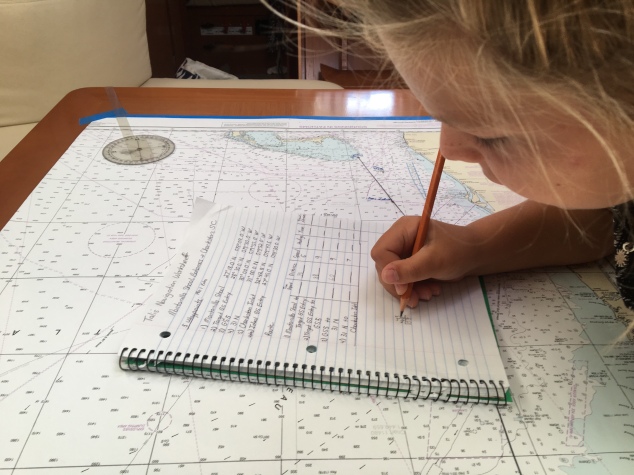 Tali started with a list of GPS Waypoints which managed maximizing our time in the Gulf Stream (which flows north at 3+ kts), with the comfort of the ride with the remaining northern component in the wind which kept the seas 6-8 ft. She plotted each point, determined the heading, and based on an assumed speed, the expected arrival time at each waypoint. This was her ‘final exam’ for all of the math work she has been doing throughout the trip. It was great to see her get excited about applying things to the ‘real world.’ 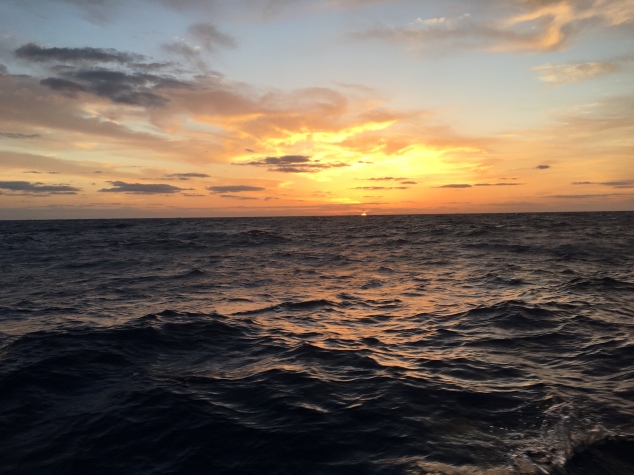 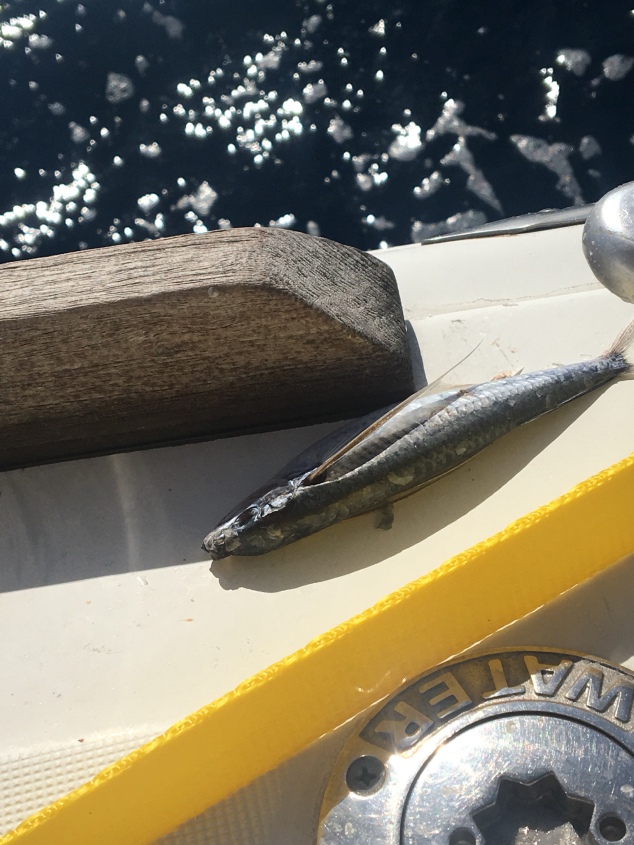 With sunrise comes cleaning off the flying fish from the deck… this particular one is special… it hit the shroud, bounced back and hit the dodger support, hit Chris in the shoulder (the face would have been pretty funny) and then he thought, bounced off the boat… but it was right next to him the whole night.

The adjustment from cruising in the Bahamas, to coming back to the US has been a big one. Since the cruising lifestyle is not permanent for us, it seems like a bit of a transition back to the way things were before we left. It’s very comfortable to get into those old habits. That said, it’s tough to see change within yourself… so looking at the change in Tali and Savy, we can hope that the trip has affected us and our outlook, but only time will tell. 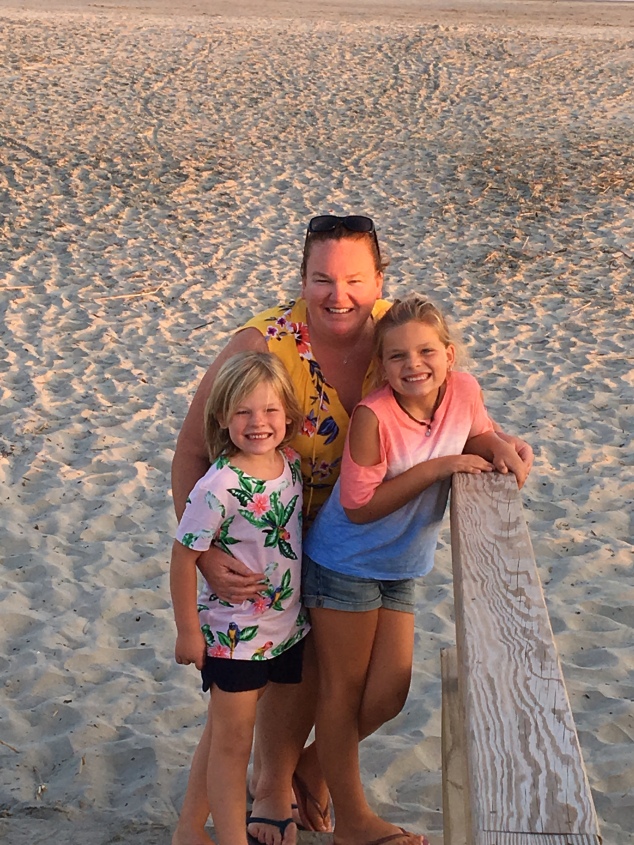 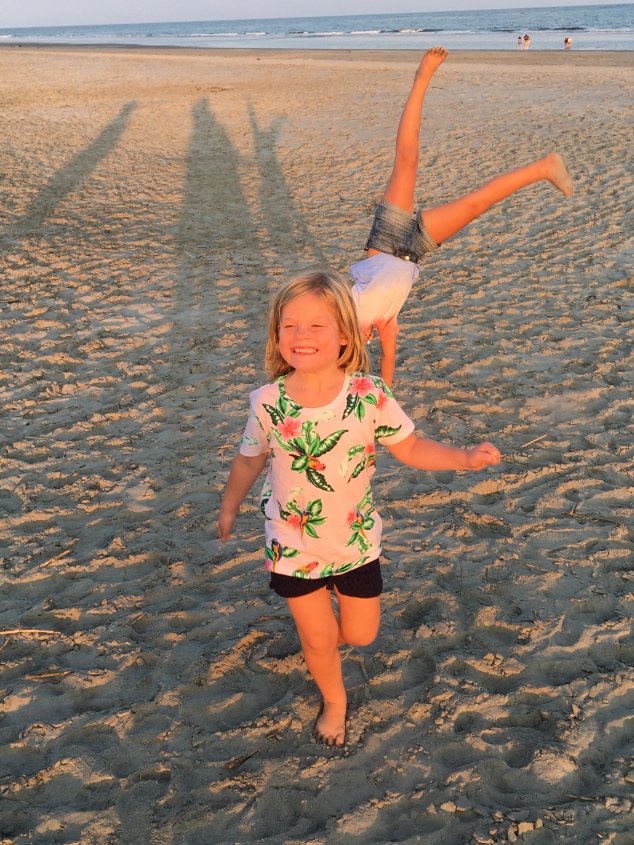 History lessons continue – Savy is signing the Declaration of Independence at the Charleston Exchange Building. We’re thinking of the ‘final project’ for history for Tali – we’ve covered Native American (Native Bahamian) through Colonization, Piracy, Revolution, to Civil War. If it doesn’t click now, hopefully it does when she takes US History in High School! 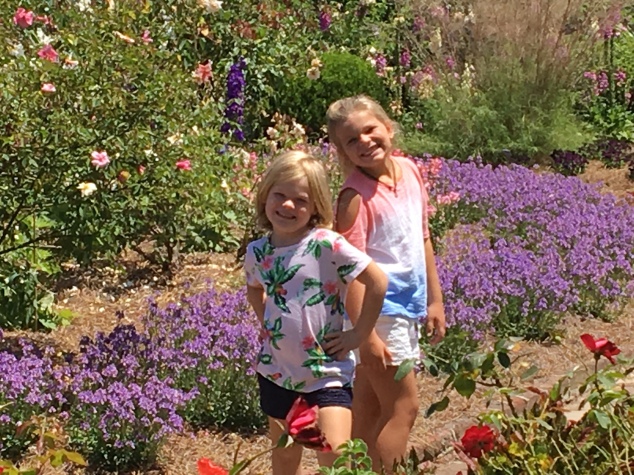 Gardens at Boone Hall Plantation… different than Middleton on the way down in that this Plantation was all about generating revenue, even to this day – it is both a tourist destination and a working farm supplying farm to table fruits and vegetables to farm stands and local restaurants. 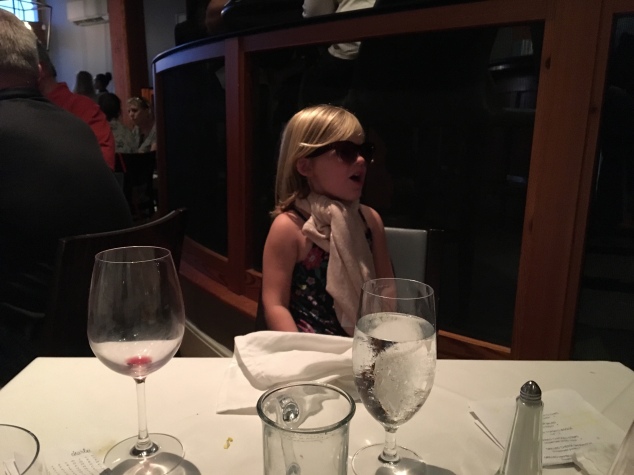 While we’re back in the States, we are still living on Intermezzo, at the whim of the wind and the tides with no plans to return until July. Between now and then, we’ll head offshore to Beaufort, NC, then take the ICW up to Norfolk (to avoid waiting for a more finicky weather window to get around the Grand Banks). We’ll look to meet friends in Annapolis around Memorial Day with a few repairs on the boat and then head north through the Chesapeake-Delaware Canal to Atlantic City where we will wait for our next offshore hop to Block Island. It didn’t seem right to bring Intermezzo back to Keyport without introducing her to her New England cruising grounds : )

We hope everyone is enjoying spring…

4 thoughts on “Back in the US Again”